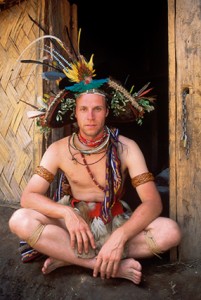 French photographer, director and fixer, Marc Dozier devotes most of his activities to Papua New Guinea. His work has given rise to the publication of many books and the production of documentaries, in particular the film The Reverse Exploration that follows the trip in France undertaken by his Papuan friends Mundiya Kepanga and Polobi Palia.

After studying literature at the University of Grenoble (France) and Graphic Arts at the University of Port Moresby (Papua New Guinea), Marc became a photojournalist and film director with a predilection for subjects in which the human being plays a main role. In-house photographer for the French magazine Grands Reportages since 1998, he has carried out features in the four corners of the world for the French and international press.

As part of his work on Papuan society, each year Marc shares the life of different tribes with whom he speaks the common language, the pidgin, in order to record the richness of these traditional societies and testify to the deep social and cultural mutations brought on by the confrontation with the modern world.

To allow these indigenous populations to have their say, he regularly invites a few of his Papuan friends to explore and commentate on the world, thus counterbalancing the hegemony of western conceptions. It has been an incredible adventure that has led to the publication of several works, such as La tribu des Français (Éditions Dakota) and the production of a documentary, The Reversed Exploration, co-directed with Jean-Marie Barrère (Production Bonne Pioche).

Particularly aware of issues of ethnocentrism, his work has led him to ponder the way we look at ourselves and at others. Concurrent to his interest in Papua New Guinea, Marc Dozier has explored the diversity in the world with photographic series that highlight human richness in a spirit of tolerance and respect. Notably, he participated in the large-format urban exhibitions: Nouz’autres (Albertville 2011) and Rouen à la croisée des Mondes (2012).